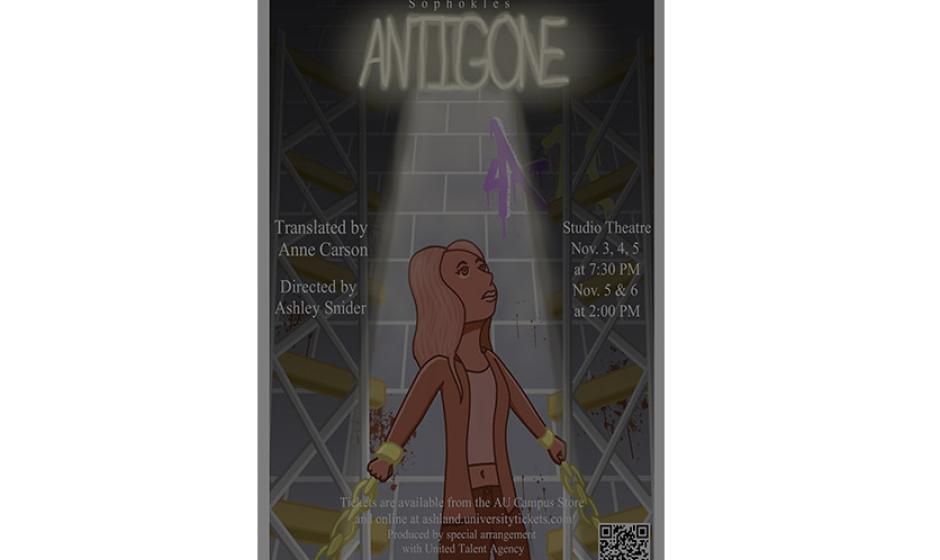 ASHLAND, Ohio – The department of theatre at Ashland University opens its 2022-23 season by presenting “Antigone,” written by ancient Greek tragedian Sophocles and translated by Anne Carson. This production, directed by adjunct professor of theatre Shley Snider, will be performed Nov. 3-6 in the Studio Theatre of the Center for the Arts (331 College Ave.). There will be nightly shows on Thursday, Friday and Saturday, Nov. 3-5, at 7:30 p.m., and afternoon matinees both Saturday and Sunday, Nov. 5-6, at 2 p.m. Also, there will be a post-show discussion of “Antigone,” following the Sunday performance in room 242 of the CFA.

AU’s production of “Antigone” adheres to its seasonal theme of “Standing Up, Standing Out” and is a modern twist on the classic Greek tragedy. In a post-war world, where those in charge cling to old laws and traditions, Antigone, played by Mattie Vermilya, dares to defy the rules and stand up for what she believes is right. The law of Thebes dictates that her deceased brother, who was deemed a war criminal, should be denied a proper burial. When Antigone goes against this and buries her brother with due respect, she incurs the wrath of Kreon, King of Thebes, played by Tobin Grendzynski. Kreon’s misguided decisions ultimately reap disastrous consequences.

Also featured in the cast are Maddie Jonas as Ismene, Becca Huegler as Haimon, Katie Snell as Eurydike, Ray Yeh as Teiresias, Jesse Baker as the Guard, Tia Shanklin as the Messenger and Leanna Uselton as the Chorus.

Tickets can be purchased from the AU campus store in person or by going to ashland.universitytickets.com. Tickets are $2 for AU students, $5 for non-AU students and $10 for adults, faculty/staff and senior citizens. Tickets will not be available for purchase at the door.