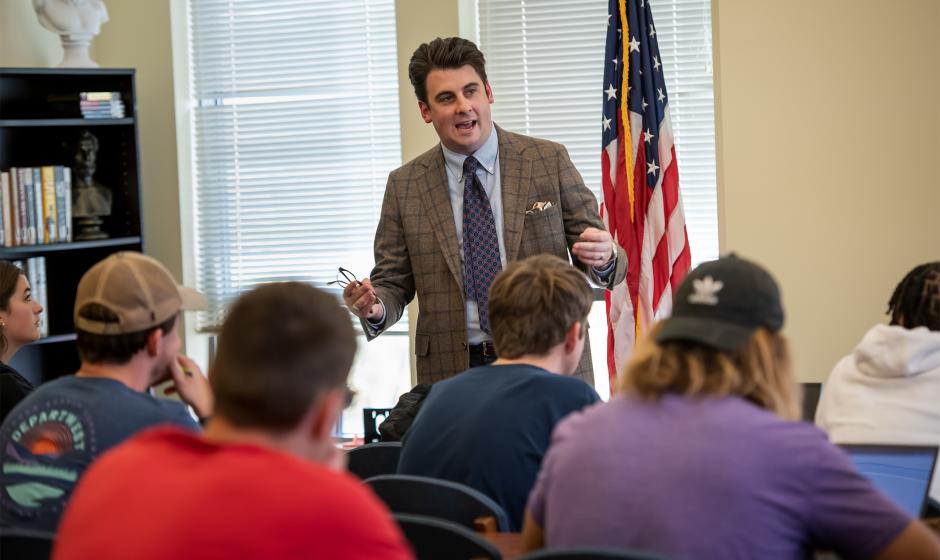 Australian native happy to be in America and teaching at AU

“Not quite as dramatically though,” said Gullotta, referencing the American reality television series that follows couples who have applied for or received those visas. “Most of those people haven’t met their spouses. We had met and been together for two years and we had spent weeks and months together. Most of those people just talked on Skype or Zoom.”

After moving to Kansas to marry his wife, Kate, he eventually received a green card, earned U.S. citizenship and is now the first Archer Fellow in Residence at the Ashbrook Center this academic school year.

The Ashbrook Center is an independent national academic center on the Ashland University campus teaching the principles and practice of free government in the U.S.

“We both visited each other’s countries for extended periods of time and I just fell in love with America very quickly,” said Gullotta, a Ph.D. candidate at Stanford University specializing in American religious history. “Dating her is how I got into American history and American religion. I figured, ‘If I’m going to date an American, I better learn about America.’”

Gullotta said his new job has been good with allowing him time to work on his dissertation for his doctorate about religious politics and the rise of Andrew Jackson, a subject he wants to publish in a book.

He is teaching two classes this semester (American History to the Civil War and Exploring the Bible) and two during the spring semester (the same history class and one about witches, witchcraft and witch hunting in America).

The position is a one-year appointment, which Gullotta said he hopes extends beyond this year. So does his wife.

“I came to Kansas, then I dragged her to New Haven (Connecticut) to study at Yale (where he received a Master in Arts in Religion), then I dragged her to California, where I did my studies at Stanford,” Gullotta said. “Thankfully, she was not dragged to Ohio … this is exactly the type of place she wants to be. This feels like a second home for her.”

The couple have enjoyed living in Ashland’s new Arrows Landing development, where the mostly retired residents there enjoy doting on the couple’s infant son, Jack, as they walk him in his baby carriage, Gullotta said with a big smile.

A big smile also crosses Gullotta’s face when he talks about his wife. They met at a comic book convention in Las Vegas. Because it was a small convention, attendees could connect on the internet before the event. Gullotta said they had great online conversations, which got even better in person in Las Vegas.

For the next two years, they stayed in contact online and through texts, phone calls and visits to each other’s countries until Gullotta decided to move to the U.S.

“I’ve drunk the 1776 Kool-Aid. I love this country. I love being an American,” Gullotta said. “I very much identify with Peter Schramm – an American being born in the wrong country.”

While the late Schramm, a longtime Ashbrook Center executive director, was born in Hungary, the 33-year-old Gullotta was born in Australia to parents who both taught. He even has a younger brother who teaches video game design at a community college in Kansas, where he is married to one of Gullotta’s wife’s friends.

Before becoming an American citizen, Gullotta studied at universities in Australia, eventually earning a Master of Theological Studies at Australian Catholic University.

Gullotta’s academic background and his writings published with The Washington Post, National Review and Bulwark, caught the eye of Gregory McBrayer, an associate professor of history and political science at AU/Ashbrook, and others at Ashbrook.

“It was very successful, so we thought we would try to bring him for the full year if we could,” McBrayer said. “Daniel is doing great so far. The students really like him, and he’s putting a lot effort into reaching them.

“Daniel is very enthusiastic,” McBrayer added. “We hope that Ashbrook is a place where he can grow as a teacher.”

As a way to recruit new students, the Ashbrook Center has been trying to bring in scholars like Gullotta and already has had some well-known ones visit from Boston College, University of Alaska Anchorage, Hillsdale College and the Civitas Institute at The University of Texas at Austin, according to McBrayer.

“The Archer Fellow Program is strong,” McBrayer said. “We plan to bring other scholars in for short terms – even some more this year.”

Even though Gullotta had impressive credentials, Ashbrook wanted to see him in action and invited him to come speak and teach for a few days last year.

“He talked on Andrew Jackson,” Sikkenga said. “It was a very interesting talk. It combined American history and religious history together in a very nice way and the students loved him.”

Sikkenga loves that Gullotta has a story like Schramm – being born American in the wrong country.

Then with a slight pause and smile, Sikkenga added: “America is fortunate to have a new citizen like him.”