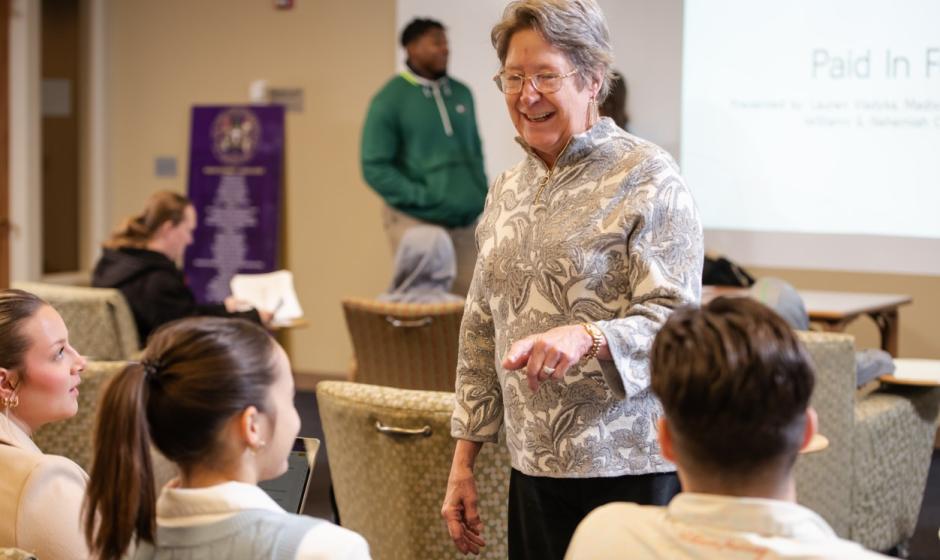 End of an era? Beloved professor plans to retire in May after 43 years at Ashland University

Room 104 in Ashland University’s College of Business and Economics was a busy place Tuesday, Dec. 6.
A local nonprofit owner and the president of Ashland Area Chamber of Commerce judged presentations
by AU retail merchandising students in the morning.
That evening, a couple representatives from Ashland business Lippert Enterprises did the same with
international marketing students.
These community-university connections have been taking place for the past several decades, thanks to
the efforts of Kris Hovsepian, assistant professor of marketing who has been bringing AU students and
area business partners together since the 1980s.
But for Hovsepian it may be the end of an era.
“I’m retiring in May,” said the beloved professor.
Chamber President Amy Daubenspeck said Hovsepian has brought up the “R” word before the past few
years and hasn’t retired yet.
After 43 years, Hovsepian said this time is different.
“43 is enough,” she said.
Not for Daubenspeck, who has been judging Hovsepian’s classes for the past several years, or Lippert
CEO Jeff Sawicki, who was judging for the first time.
“Kudos to your professor,” Sawicki said to the three groups of IM students after their presentations. “I
wish she would stay around for 40 more years. This is a phenomenal group.
“Anyone who is looking for a job, we’re always looking for good marketing students,” Sawicki added.
Offering marketing plans to Lippert for expansion into international markets was the latest in a long line
of local businesses that have received similar treatment from Hovsepian’s students. Bendon, Hedstrom
and Rain Drop have been a few of the others over the years.
While not for international growth, Hovsepian’s retail merchandising students suggested marketing
plans for local growth for Paid in Full after visiting the nonprofit, by-donation, volunteer-run, second-
hand store/food pantry in Ashland and researching it.
“You guys had a lot of good ideas,” Owner Mandy Heilman said to members of the winning team of
Taylor Anderson, Jordyn Perry and Kaitlynn Winters. “I just don’t have the volunteers to implement
them. If I had the volunteers, I feel like I could implement a lot of your ideas.”
That lack of consistent volunteers – she has many who help once or twice and then doesn’t see them
again – is why Heilman said it’s hard to do the things the three teams of students suggested, such as
color-coding her inventory, changing the layout of her store and revamping her social media.
Cost also makes it difficult to apply some other suggestions, such as creating a website, adding more
signage and paving her parking lot, added Heilman, who also home schools her eight children who range
in age from teens to toddlers. Six of them joined her at AU.

“They were so excited to go to college today,” Heilman said with a big smile about her “marketing
team.”
One of the students on the winning team, Anderson, is a second-generation student for Hovsepian.
“I had Taylor’s dad in class in the early 1990s,” Hovsepian said. “It’s time to retire when you have a
grandchild of a former student. I haven’t gotten there yet.”
Does that mean? …
No, said Hovsepian, who admitted she’s going to miss her students but is ready for the “R” word before
she does have a former student’s grandchild in class.
“They’re trying to talk me into going one more year, but I’m tired,” she said, then with a slight pause
added: “I might come back and teach some classes.”
Even if it isn’t full-time, having Hovsepian teach some classes in “retirement” would be fine with
students like Anderson, who has taken three classes from her and will take another next semester.
“I like how she does a lot of hands-on presentations in her classes of the application that we’re going to
take into the real world,” Anderson said.
That practical way of teaching is what Bria Meisse likes most about Hovsepian’s classes.
Meisse was part of the winning IM team with Lauren Vladyka, Taelyn King and Riko Siko that offered
ways Lippert could expand into Germany.
Another team did the same for Australia and a third for South Africa.
After Hovsepian said the winning team will receive an A and the other teams much lower grades like D’s
or F’s, one student said: “Wait, you’re retiring. I can’t repeat this class without you.”
While that student may not have realized it, but Hovsepian was joking about the grades. The other two
teams will receive good grades, too, Hovsepian said.
A few weeks into the semester, Sawicki spoke to the class about Lippert, which extends the life of
inventory by providing parts needed in industries like mining, agriculture and automotive – areas the
three IM teams focused on with their presentations.
While not in any international markets, Sawicki said Lippert is always looking for acquisitions.
“They gave us some good ideas of how to start to get involved with a company that is already (in a
country),” Sawicki said while discussing which team should win with Greg Spoerr, a Lippert marketing
specialist. “They gave us some great advice.”
Sawicki told the students how hard it was to pick a winner and how valuable the experience will be for
them beyond AU.
After Sawicki and Spoerr left, Hovsepian also congratulated all the students for an “outstanding job.”
As the students filed out, Hovsepian gave members of the winning team some additional praise –
including something she has hoped for with all her students over the years.

“I want you guys to call me in five years and tell me you’re making more money than me,” she said.
Then with a slight pause and a smile added: “But, of course, I will be retired then.”