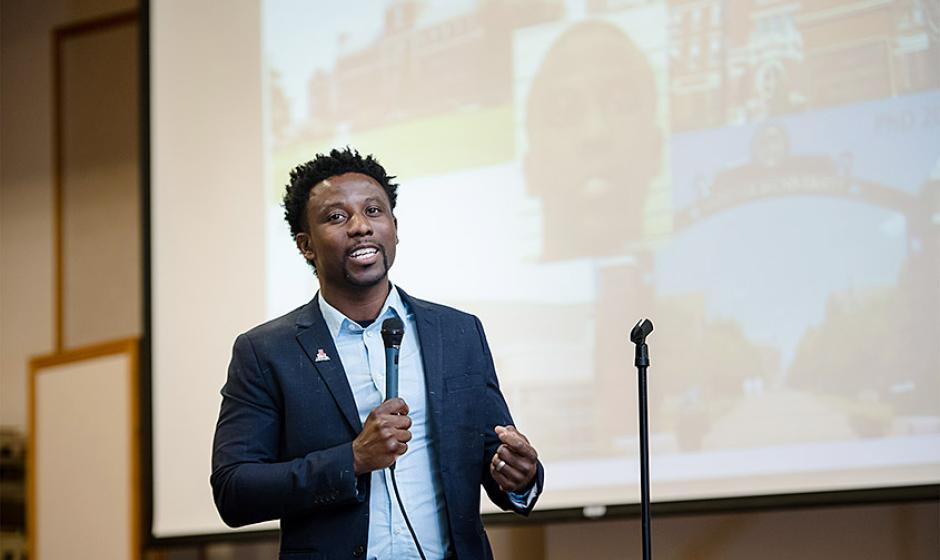 Stan Andrisse is a research endocrinologist who has done research on diabetes, written a book and is a faculty member at Howard University College of Medicine, a visiting professor for Imperial College London and used to work at Johns Hopkins School of Medicine.

James Harris, a certified legal assistant/paralegal, is working to add to his associate degree with a bachelor’s degree in psychology and criminal justice while working as a pre-construction welder.

Jessica Reyes is a case manager for an inpatient treatment center in Zanesville who will graduate in December with a bachelor’s degree in communications and a minor in business.

Andrisse, Harris and Reyes accomplished all these things during and after time in prison.

AU is home to the longest continuously operating correctional education program in the U.S. and goes along with the university’s Christian heritage, which allows for second chances.

Established in 1964, the university now delivers a transformational education experience to thousands of students within 125 correctional facilities across 13 states and the District of Columbia, giving them the opportunity for second chances in their lives.

The summit included a broad range of speakers, panel discussions and breakout sessions for the 90-some people who attended and 60 to 70 others who participated virtually.

The summit’s goal was to discuss best practices of correctional education and how society can move toward incorporating reentry initiatives into post-secondary educational opportunities, according to Aaron Kinzel, director of transitional and alumni services for AU’s correctional education program who, like Andrisse, Harris and Reyes, has been incarcerated.

After being imprisoned for 10 years, Kinzel has earned multiple degrees, including a Ph.D from the University of Michigan-Dearborn, where he also is a part-time faculty member in its criminal justice department.

“I think we had critical feedback in a positive sense,” Kinzel said. “People were really asking deep-diving questions.”

Kinzel said he hopes to see the summit become an annual event and maybe even grow to more than a one-day affair.

Andrisse was the keynote speaker, who, like Kinzel, was sentenced to 10 years in prison. He does many similar presentations across the country. His next stop was Florida.

“I was told by a prosecutor that I had no hope for changing,” said Andrisse, who started selling drugs before he was a teenager growing up in Ferguson, Missouri, near St. Louis and was arrested for the first time at 14 years old on way to three felony convictions by the time he was in his early 20s. “I clearly didn’t quite live up to the expectations that this prosecutor had placed on me as this career criminal, as this hopeless individual stuck in this revolving door of incarceration.”

He told the crowd he is working toward helping change the narrative so other former prisoners can be seen in a different light through his example, his presentations and his nonprofit organization, From Prison Cells to PHD, which mentors formerly incarcerated individuals with its Prison-to-Professionals (P2P) program.

Andrisse also has published a book on the topic and P2P is part of a coalition of nonprofits across the country working to increase access to education for incarcerated people and those transitioning out of prison.

After his father died of type 2 diabetes while Andrisse was in prison, Andrisse started reading about the disease and said he became so interested in learning that he applied to many universities while incarcerated. Only one accepted him.

“St. Louis University offered me that second chance that Ashland is doing for so many individuals it is working with,” Andrisse said. “Part of what Ashland University is doing with its correctional education program is helping to change the narrative of what a person who has been to prison is capable of, has the potential to achieve and wants to achieve in their life.”

Harris is one of those people who said AU has helped change his narrative.

“Ashland offered an opportunity I could never pay back and that’s why I’m here now,” said the 36-year-old who drove from the St. Louis area with his wife, Sarah, to attend the summit.

Before being released in 2021 from prison in Missouri, Harris earned an associate degree in general studies from AU. He said he probably would have gotten a bachelor’s degree but his prison didn’t offer AU classes until the end of his 11-year sentence.

He said he is working toward a bachelor’s degree in psychology/criminal justice to eventually help others avoid the path he took early in his life.

“It’s been an exciting road for him to accomplish the things that he has after everything he’s been through,” his wife said as she smiled at her husband, whom she has known for many years and married while he was incarcerated in 2018.

Like Andrisse, Harris grew up in Ferguson, Missouri. He said he grew up in poverty and with poor education.

With the hunger for education he picked up in prison through AU, Harris said he wants to keep learning.

“I’m trying to get to his level,” said Harris while pointing to Andrisse, who was signing some of his books for attendees after his presentation.

Five other formerly incarcerated individuals took part in a panel discussion. They talked about their experiences post incarceration, what was helpful in their transition and where barriers/opportunities to successful reentry exist.

Four spent time in prisons across Ohio and one in a Georgia prison. Two of them were women – one originally from Michigan and one who grew up in Wisconsin.

The one from Wisconsin, Jessica Reyes, said her transition from a prison in Newark has been mostly successful since being released in December 2019.

Reyes, who works as a case manager for an inpatient treatment center in Zanesville, went to prison for 3 ½ years when she was 25 years old on drug-related charges.

Most of the formerly incarcerated individuals at the event went to prison for crimes dealing with drugs.

“My life is great now,” she said with a smile. “I help people transition from prison. I just helped a couple of guys with resumes.”

Getting an associate degree from AU allowed Reyes to put education on her resume, which before that had no work history and a criminal record. She said she is graduating in December with an AU bachelor’s degree in communications.

Besides Andrisse, some of the other speakers gave talks about respect and reentry into the community, how post incarceration is far more than “getting a job” and the importance of integrating reading and writing in correctional education.

Throughout the event, Kinzel said he noticed a lot of people sharing business cards, adding that discussing collaborations was one of the goals for the summit.

One hope is for more collaboration among universities and prisons to help as Andrisse said in his presentation: “change the narrative so prisoners can be seen in a different light.”

Harris, Reyes and Kinzel also are working toward changing that narrative through their stories of making good on second chances with education.

“The goal is education over incarceration,” Andriss said, “and education is the most powerful tool to reduce recidivism. It is the most cost-effective tool to utilize to really help change lives.”