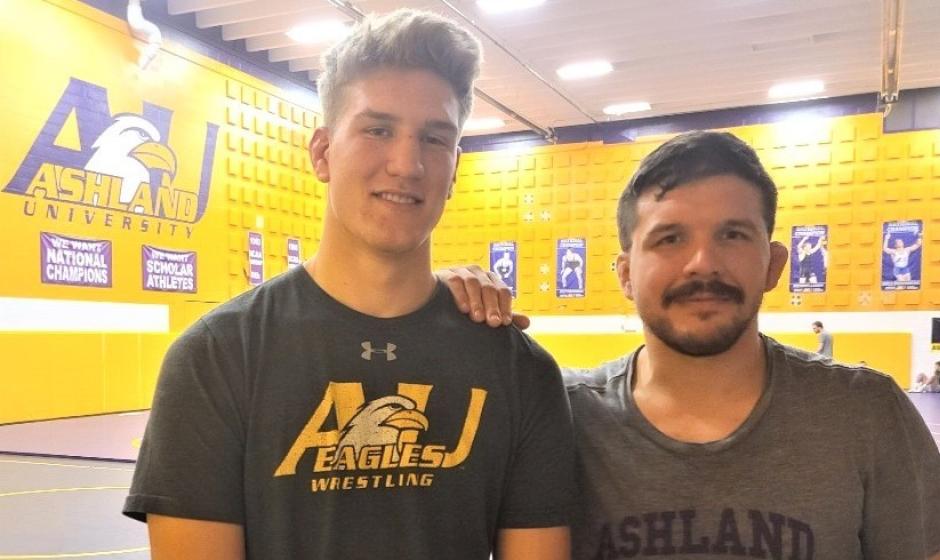 Ashland University Wrestling Coach Colt Sponseller sees only one problem with having his nephew,
Walker Uhl, on the team.
That’s Uhl stealing his clothes for practices and workouts even though the redshirt sophomore is 6-foot-
3 and Sponseller is, well, quite a bit shorter.
“I’ll see something that is a medium on a guy who should be wearing XLs,” Sponseller said with a laugh.
And the other wrestlers only have one “issue” with the team’s uncle-nephew dynamic.
“They make fun of how messy he is,” said Sponseller, who has a clean locker. “They say, ‘Why don’t you
make your nephew clean up his locker?’”
Sponseller and Uhl agree it’s a dynamic that works well as the few complaints about it really are just
good-natured joking and its positives have been evident on the wrestling mat.
That will be on display Saturday as the Eagles play host to the Great Midwest Athletic Conference
Championship in Kates Gymnasium starting at 9 a.m. Tickets are $10 for adults and $5 for students and
senior citizens and can be purchased at goashlandeagles.com.
“We’re proud and excited to host the GMAC Wrestling Championships,” said Al King, AU director of
athletics. “It’s been a long time since we’ve had a wrestling tournament like this in Kates Gymnasium.
You have to go back to the NCAA regional or the Wendy’s Classic for a full day of wrestling like this.”
Under Sponseller, the Eagles have won the past two GMAC tournaments and now look to make it three
in a row.
Uhl, in the 197-pound weight class, will be one of the top wrestlers in the tournament, having gone 3-0
in that weight class last year and finishing 2-1 two years ago at 174 pounds. He also is ranked No. 8 at
197 pounds in NCAA Div. II this season.
“Having it at home is pretty exciting, especially for the fans,” Sponseller said. “Everyone fields a good
team. We had a good battle with Lake Erie last year and Tiffin and Findlay have great histories.”
Sponseller and Uhl also have a great wrestling history together.
Growing up, Uhl used to attend Sponseller’s high school and college wrestling matches. Like Uhl,
Sponseller wrestled for West Holmes High School. After WHHS, Sponseller competed for Ohio State
University.
As an OSU grappler, Sponseller was both an NCAA Div. I All-American (fourth-place nationals finish at
165 pounds in 2011) and Academic All-American (2010-11). He earned an overall record of 105-24 (.814)
at OSU, and after his collegiate career, was fifth at the 2015 world team trials.
With that kind of resume, Uhl admitted that he was a little intimidated to have his uncle as a coach. But
now he wouldn’t have it any other way as he said he has learned so much from his uncle – and not just
about wrestling.
Sponseller hopes that’s the same for the rest of his wrestlers.

“My purpose isn’t necessarily to make them better wrestlers, but to make them better people,”
Sponseller said. “If that means I have to be an uncle to 38 guys on the team, that’s what I will be. If I
have to be a coach to 38 guys on the team, that’s what I will be.
“I treat him the same as I do everyone else,” he added while looking at Uhl.
Deciding to come to AU for Uhl actually had nothing to do with his uncle because Sponseller wasn’t the
coach at that time.
Besides the strong wrestling reputation, Uhl said he chose AU for its nursing program, it was close to his
home in the Killbuck area and he liked the team chemistry when he visited. And his mother, Sponseller’s
sister, graduated from Ashland University with a teaching degree in the late 1990s and is now a sixth-
grade language arts teacher at West Holmes.
“When I heard the job opened up was actually the day I got married,” said Sponseller, who started his
coaching career at another Division II school, Edinboro University, in 2012 before moving onto Ohio
University in 2015. “Walker let me know about it. I was looking to get back close to home as a West
Holmes graduate and Ashland University was the one place I always wanted to be because it was where
I was first introduced to wrestling coming here for camps at 6, 7 years old.”
For Sponseller and Uhl, wrestling is a family affair. Sponseller’s brother wrestled at Kent State University
and has a young son wrestling now; his dad wrestled and coached youth wrestling at West Holmes for
20 years; and his other sister has a son in youth wrestling, too.
Just as Uhl was inspired while watching Sponseller wrestle, his two young cousins get to see him wrestle
now.
“They might be future Eagle wrestlers down the line,” Sponseller said of his two younger nephews.
Being a young coach, Sponseller admits separating the roles of uncle and coach with Uhl can sometimes
be difficult. In the wrestling room, he said he does his best to be a coach to Uhl just like with the rest of
the wrestlers, and away from it, the two agree that they prefer to talk about other things besides
wrestling – uncle-nephew kind of things.
Other people like King have noticed how well Sponseller has done handling the uncle-nephew, coach-
wrestler dynamic with Uhl and the rest of the team.
“Colt is a young coach with a great deal of energy,” King said. “He’s always looking for ways to make not
just our program better, but he looks for ways to contribute to wrestling and make it better. I think that
enthusiasm, dedication and work ethic set a great example for our team.
“I love talking about wrestling with him,” King added. “For someone so young, he has a great knowledge
base and he’s been mentored by some fine coaches. Whether it’s his nephew or anyone else on the
team, they are going to be coached extremely well.”