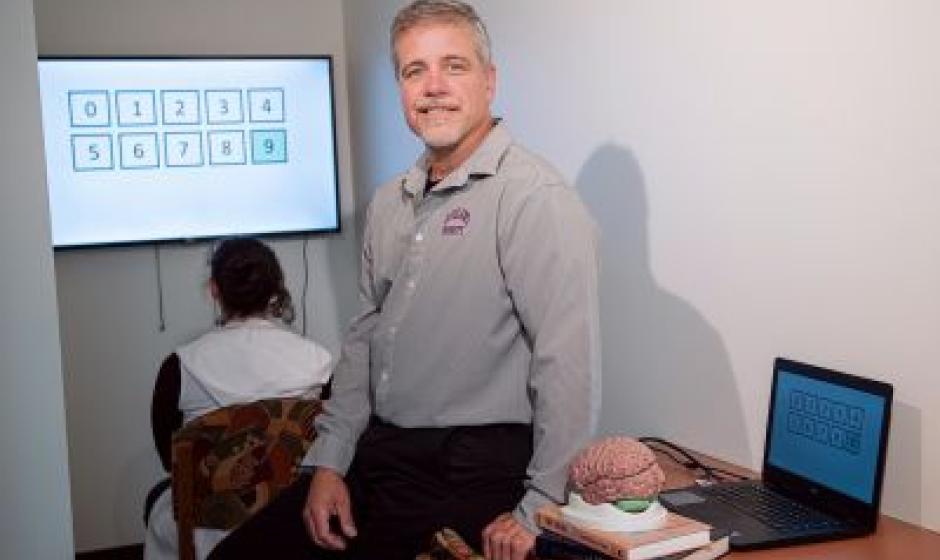 Mitchell Metzger admits that his students “bailed him out” on his study leave work during the spring semester.

“The students collected every piece of data,” said the Ashland University psychology professor. “It was so much work to get that data. The students were putting in a lot of hours every week.”

The data was used to investigate visuospatial bootstrapping, which is using spatial information to try to bolster memory performance.

Five seniors and one freshman tested more than 200 students one at a time for around 10 to 15 minutes each in AU’s cognitive psychology lab for a series of experiments.

All of the students’ work, with the help of Metzger and his former colleague, Peter Mallik, who is now working for a research company, resulted in one article in the Journal of Cognitive Psychology and a presentation at URCA – Undergraduate Research and Creative Activity symposium, an annual mini-conference on campus for students to present research, artwork and other projects.

“It was a good experience and good to get students involved,” said Metzger, who is starting his 20th year at AU. “They get excited about things just like we do and you end up with a nice result in conference presentations and publications, which helps them out.”

The students’ presentation at URCA involved the first of three experiments in the study. In this experiment, participants were placed in front of a computer screen and given sequences of numbers and asked to recall them, then were given the same sequences with additional cues – in a keypad spatial formation, followed by a clock face arrangement.

“The cues you provide them with are things they already have in their memory system,” Metzger said.

For example, if 5-1-6-8-2 was the sequence, the keypad formation would pop up five times, first with all the spaces blank except where the 5 is on the keyboard, followed by just where the 1 is and so on until it gets to 2. The same was done with the clock face arrangement.

“What you find is if people are given those kinds of trials,” Metzger said about the additional cues, “they can outperform in trials in which they are given things individually.”

Because the keyboard spatial process has been tested before to show it helps boost memory performance, Metzger said they wanted to see if other spatial frameworks provide the same or better memory improvement. That’s why the clock face sequence was added to the experiment.

“We found the clock face presentation worked better than doing things one at a time, but didn’t work quite as well as the keypad,” Metzger said.

For the second experiment, which Metzger will present in November, the same three conditions were used but the numbers of digits and the durations of the sequences were manipulated.

“But the interesting thing for us was,” Metzger added, “we were wondering if in those really difficult conditions, do you get this difference in which the keypad condition and clock condition would work? They worked pretty much the same, so that clock face condition seems to be a pretty good way to test that spatial bootstrapping effect.”

What would happen if you removed a lot of the spatial information and just gave people a little bit of it?

How much spatial information is needed to see an increased memory performance?

The third experiment attempted to answer those questions by comparing test subjects’ recall after seeing number sequences using a two-by-five grid formation with the numbers 0-4 in a line across the top and 5-9 in a line at the bottom compared to seeing the numbers individually in the center of a computer screen.

“What we found, just like the keypad and the clock, it outperforms the single condition,” said Metzger, who added that work still needs to be done on the third experiment so it won’t be presented by students until a conference in April in Chicago.

“Typically, when we go to conferences, we like to have the students present,” Metzger said.

Metzger said he was pleased with how his study leave work went, particularly how the students “bailed him out.” Most importantly, it met the goals he wants to achieve with study leave work. This was his second one.

“My goals are to, No. 1, get students involved because it is a great experience for them,” he said. “And hopefully we can get conference presentations out of it that have students’ names on them where we’re helping them. And the icing on the cake is getting published that has student involvement.”