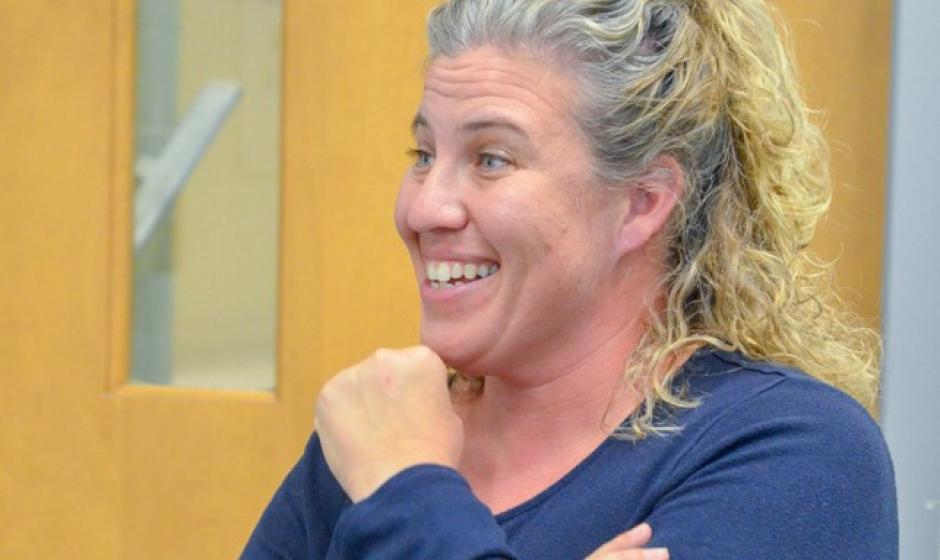 Nicole Harriott ’99 didn’t have a career in mind when she came to Ashland University.

That didn’t change after four years at AU.

It took until graduate school to finally realize the kind of job she wanted.

“I just want to reassure you: if you don’t know what you exactly want to do, that’s OK,” she told
students in the audience during a presentation she gave Friday, Oct. 21, at her alma mater. “As long as
you follow your passions along the way, you will find the right career for you.”

Her passion for organic chemistry eventually led to the drug discovery industry and a job at Neurocrine
Biosciences in San Diego, where she has worked her way up from research scientist to the head of the
company’s chemistry department and helped discover Ingrezza, a drug that treats tardive dyskinesia
(TD), a condition in which people taking certain mental health medicines experience uncontrollable
movements in different parts of their bodies.

The approval of Ingrezza in 2017 has the company growing, said 45-year-old Harriott, who has been with
Neurocrine for 17 years.

“I am new to the sciences being a freshman here and am still trying to figure out what I want to do with
my major and my next steps after Ashland,” Eichler said. “So, I’m just trying to get different exposures
through these different talks.”

Jeffrey Weidenhamer, longtime chemistry professor at AU, said a lot of his students graduate not
knowing exactly what they want to do.

“To have an alum come back and give a talk like this and be as successful as she is, is great for our
students to hear,” Weidenhamer said. “It’s good for them to hear the experiences of alumni.”

Because she was coming to Ashland for homecoming weekend, Harriott asked Weidenhamer if she
could give a presentation about her career and the discovery of Ingrezza.

“I actually came to AU not to study biology and chemistry,” Harriott admitted to the audience. “I really
came here to play soccer.”

Then with a sarcastic tone, she joked “I pretty quickly realized with my blinding speed and my
athleticism that professional soccer was not in my future.

“Luckily,” she added in a more serious tone, “along the way, I fell in love, right in these halls, with
organic chemistry.”

During her time at AU’s Kettering Science Center, Harriott said she was fortunate to take part in three
research projects – two in biology and one in chemistry.

She did this while playing midfield and defense in soccer. Soccer was the main reason she returned to
AU this homecoming. Living so far away, Harriott said she hasn’t gotten back to AU much since her
graduation.

About 30 soccer players from both the men’s and women’s teams in the late 1990s were having a
reunion over the homecoming weekend to celebrate the induction into the Ashland University Sports
Hall of Fame of one of their own, Simon West.

It also worked out that she could help her parents with some health issues during her visit. Her father
had triple bypass surgery a few days before her talk at AU and is recovering nicely, while her mother
recently had hip surgery and can’t drive, Harriott said.

While her parents live in the Columbus area now, they were in the Cleveland area when Harriott was
growing up. Harriott played four sports – soccer, softball, tennis and basketball – at Admiral King High
School in Lorain.

With her two children – 13-year-old Nate and 11-year-old Mia – playing on travel baseball and softball
teams, Harriott still is involved in sports.

“Mia I named after Mia Hamm hoping she would be a soccer player,” Harriott said, “but she likes
softball so now I coach a lot of softball.”

When she finds time, Harriott said she also likes to play golf with her husband.

“Because of my sports background, teamwork is a big thing with me,” she said. “Everything we try to
build, especially since I’ve taken over chemistry, is be a good team player. A win for any project is a win
for Neurocrine. That’s where my social skills have helped.

“You can be the best scientist in the world, but if you can’t communicate, you can’t win people over,”
she added about one of the biggest keys to taking an idea for a drug to the development stage and
ultimately approval.

Sports also helped her develop grit, a word she said she likes to use often. Having grit has helped her
deal with the many setbacks in the drug discovery industry, Harriott said. On average, it can take 10 to
15 years (Ingrezza took 11) and $1.3 billion to develop a drug and get it approved, she added.
“The number of places where you can fail was shocking to me,” Harriott said.

When she first started at Neurocrine, the company had spent many years working on a sleep drug that
had to be pulled for various reasons and things weren’t looking good for the company, Harriott
admitted. Luckily, she said she survived a first round of layoffs and, because she was working on
Ingrezza, made it through a second round of job dismissals.

Ingrezza has provided the once small company that focuses on treatments for movement disorders and
neurological-related diseases with stability and growth, according to Harriott.

Throughout her time at Neurocrine, Harriott said she has learned of so many science-related jobs,
including ones she never thought of like patent attorney.

“When I got into the drug discovery game, I had no clue as an entry-level scientist that there are so
many scientific careers,” she said.

Because she had no clue what kind of job she wanted after AU, Harriott decided to go to graduate
school. Harriott picked the University of California San Diego for its “great lab to work in” and “sunshine
and beaches,” she said with a smile.

During that time at UCSD, Harriott talked with some postdoc students who had worked in industry and
decided she would like to go into an industry job more than an academic one because the faster-pace of
industry fit her personality more, she said.

To help get her foot into the industry door, she did her postdoc at the University of Chicago where she
could learn a lot of chemical reactions.

“While I loved Chicago and the Chicago nightlife, I did not love the Chicago winters,” Harriott said. “So
that’s when I went back to San Diego to Neurocrine.”

Chicago winters, not knowing an exact career path for many years and all the setbacks she has
experienced in the lab are worth it when you meet someone who has benefitted from her work on a
drug, Harriott said.

One woman in her 70s was so grateful for Ingrezza that she and her husband drove one day from
Northern California to San Diego to thank the Neurocrine staff, including giving Harriott a big hug.

“When you can truly affect the quality of someone’s life, there’s no better job,” she said. “That’s so very,
very rewarding.”